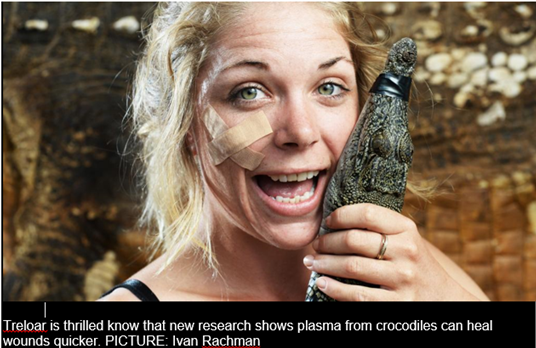 The secret to younger-looking skin may exist in a vial of blood from a saltwater crocodile.

In a new study set to cause a stir in the lucrative anti-ageing industry, the NT News can reveal that the Territory’s favourie reptile could hold the key to eternal youth.

The study – Wound Healing Properties from Plasma and Serum – was conducted by academics at Thailand’s Khon Kaen University off the back of international research that has already shown the powerful antibiotic and antioxidant properties of crocodile blood. And it’s something Crocodylus Park scientist Charlie Manolis says could value-add the demand for the Territory’s high-quality crocodile skin products.

“There’s been a lot of research undertaken into crocodile blood, with a lot of the focus on virus and bacteria which crocodile plasma has been shown to kill,” Mr Manolis said.

“But this line of research was looking at skin repair and helping skin to repair and rejuvenate itself rather than fighting injury. So not just the ability for crocodile plasma to fight wound infection, but also assist in wound repair.

“So be long-lived and prosper with great skin.”

Mr Manolis said while the study was undertaken on Thailand’s crocodylus siamensis he said the research could apply to the Territory’s freshwater and saltwater crocodiles.

Mr Manolis said he had received many calls from people in Asian countries trying to get hold of crocodile blood, particularly in the last 12 months.

In some Asian countries crocodile blood that has been freeze-dried into tablets is thought to combat disease, including attacking the symptoms associated with HIV.

Some cancer patients have also turned to crocodile blood in recent years.

“We get quite a few inquiries from people wanting to get our crocodile blood,” Mr Manolis said. “Australia has good reputation for quality. where as in Asia there’d be a few unscrupulous people around no doubt making it out of chicken blood. A lot of calls have come from people who are familiar with the market.

“For the industry there is a focus on skins being the primary product however these other byproducts can become valuable and in turn it helps profitability.

“The potential is certainly there for the NT.”